“No, we are not under any form of political pressure,” the Energy Commission’s Director of Renewable Energy, Mr Kofi Agyarko, dismissed a question posed by The Fourth Estate reporter.

The Energy Commission had seized 21 containers suspected to be charcoal, which was about to be illegally exported. It had also filed a complaint at the Tema Police Criminal Investigations Department (CID), which had started work on the case.

“I don’t look at party colours here in this office,” Kofi Agyarko maintained in an interview he granted this reporter on July 4, 2022.

But 17 days before the interview, the Tema Police CID had been given a letter. It was from the Energy Commission. It said the commission “has decided to withdraw the case.”

The letter was signed by the same Kofi Agyarko. The case was officially dead.

Why charcoal is big business

The global market for charcoal was worth US$6.86bn in 2018. Homes in the US and Europe are turning to barbecued foods, basically, food grilled or prepared with charcoal. Mining industries also use it for gold recovery. And for many in the industry, charcoal is also a cheaper agent for purifying water and air. Charcoal, when burnt in the absence of oxygen, produces activated carbon that can be used for various industrial purification processes. During wastewater treatment, activated charcoal is highly utilised for filtration purposes.

These high demands and the economic returns are part of the reasons Ghana is Africa’s fifth largest exporter of charcoal. According to worldtopexports.com, in 2021, Ghana exported $1million worth of charcoal to destinations such as China, Turkey, Germany, and Lebanon.

Ghana is, however, paying a heavy price for being the world’s ninth-largest producer of charcoal.

Concerns about environmental degradation are getting drowned out by the piercingly noisy sound of chainsaw operators in Ghana’s forests.

This is why, in May 2021, the Savannah Regional House of Chiefs  banned commercial charcoal burning activities in the region.

The Ministry of Lands and Natural Resources is also considering a charcoal export ban if the charcoal production, trade and export space is not sanitised quickly. The minister, Samuel Abu Jinapor, complained in November 2021: “There is an upsurge in the export of charcoal out of our country, and that is a driver of forest degradation.”

Tackling this problem on the ground falls on the Energy Commission. The law says the Commission should “regulate and manage the development and utilisation of energy resources in Ghana.”

In April 2022, there was a tip-off at the Tema port when 40-footer containers–about 21 of them–made their way into the GPHA and Overseas terminals.

Facing the beckoning sea, the containers were to be loaded onto a ship named, GABRIAL A WAS12N 22, according to the information provided by the shipping company, Arkars Shipping Line, based in Turkey. The goods were bound for the United Arab Emirates. 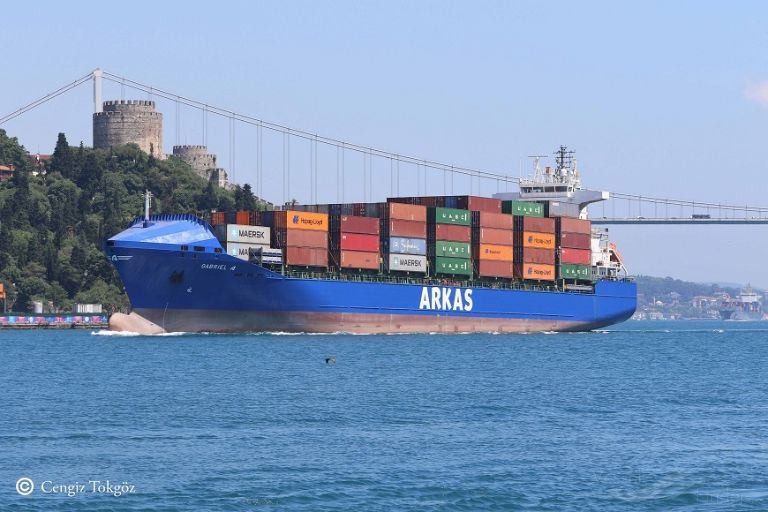 Information gathered by The Fourth Estate during a police inspection was that the ship was to arrive in Ghana on April 14, 2022, and depart in the early morning of April 15, 2022.

But 24 hours before the ship’s arrival, there was suspicion that all the 21 containers were full of charcoal, a fuel resource that could not be exported without a licence.  According to the Renewable Energy Act, 2011 (Act 832), “a person shall not engage in a commercial activity in the renewable energy industry without a licence granted under this Act.”

The Fourth Estate reporter contacted the Tema Police CID over the detention of the charcoal containers. The exporter had indicated that he was exporting some foods. The police therefore needed confirmation that, indeed, the containers carried food, not charcoal.

The police had already detained a suspect and on June 14, 2022, the police revealed to The Fourth Estate that they were scheduled to inspect the containers.

The Fourth Estate reporter obtained permission from the Tema police CID to join in the physical inspection of the containers.

The inspection team opened 15 containers at the GPHA Terminal. It was supervised by Inspector Felicia Boatemaa of the Tema Police CID. It was carried out in the presence of customs officials, the GHPA export terminal officials, an official of the shipping line, Arkas and this reporter.

However, the exporter of the containers was missing in action.

When giant scissors clasped open the locks of all 15 containers at the GHPA terminal. Every single of them was fully stashed with charcoal. The six others at Overseas terminal were not inspected that day. But they were also later confirmed to be charcoal.

Table 1 showing the 15 container numbers obtained by The Fourth Estate during the inspection.

The average export price for a ton of charcoal is $463 according to the Global Charcoal Market Report 2022. The Energy Commission has confirmed the 21 containers contained 400 tonnes of charcoal. This puts the value of the export at about $185,200. Using an exchange rate of GH¢10 to a dollar, the entire value of the attempted shipment is GH¢1.85million.

According to the Energy Commission, the 21 containers are the biggest consignment of illegal charcoal it has ever seized.

Who is the exporter?

One Friday in June 2022, a man showed up at the Police CID at Tema port. He gave his name as Dela Gershon Zuttah, the governing New Patriotic Party (NPP) constituency chairman for Afadzato South constituency in the Volta Region. He is popularly called ‘Chairman Dela’. When he claimed ownership of the containers, he was quickly detained to assist in criminal investigations.

Before goods are shipped out of the country, every exporter electronically fills what is known as an Export Declaration Form with the Customs Division of the Ghana Revenue Authority. This document states the goods to be shipped, and the details of the exporter.

The Fourth Estate has obtained a copy of the document covering some of the containers of charcoal. The exporter is Jallins Global Business Ltd. It does not have a licence to export charcoal.

Our findings from sources at Arkas Ghana Limited, the shipping company that was going to transport the charcoal, also confirm that Jallins Global Business Ltd is the forwarding agent of the 21 containers.

The company’s representative for the 21 containers is also named in the export document. He is Collins Antwi.

It was while the police were making headway in its investigations that the Energy Commission suddenly told the police it was disinterested in continuing with the case.

The commission’s Director of Renewable Energy, Kofi Agyarko, claimed that the commission had already “investigated the matter and has decided to withdraw the case.” The letter claimed the Energy Commission would be “applying different sanctions against the exporter.”

As it stands, the shipping line says Jallins Global represented by Collins Antwi is the forwarding agent. Customs says Jallins is the exporter. The Energy Commission has stopped the police from making a conclusion and denied political interference. But the Commission claims it is Azzam Brothers Ltd.

The Commission has not been able to produce any evidence to back this claim except a claim that Azzam Brothers Ltd came forward to take ownership of the charcoal.

The Fourth Estate has given a copy of the export documentation to the Energy Commission, showing that the exporter is Jallins Global Ltd.

However, the Commission maintains the owner is Azzam Brothers Ltd. The Commission further claims that the NPP Constituency chairman, “Chairman Dela”, detained briefly by the police is a representative of Azzam Brothers. It said he produced a charcoal production licence to “substantiate their claim of ownership.”

When The Fourth Estate reporter contacted Dela, pleaded and admitted ownership but claimed he was misled by the agent, Collins Antwi.

Is there a cover-up at the Energy Commission?

The offence that was being investigated by the police was not about the ownership of the charcoal. It was the export.

Azzam Brothers is a licensed charcoal producer, and by claiming ownership of the charcoal alone, it has not committed any crime. The only offence it has committed, according to the Energy Commission, is producing more charcoal (400 tonnes) than the limit of its licence (240tonnes). It breaches the conditions of Azzam Brothers Production Licence under Section 16(1) of the Renewable Energy Act.

The Commission by law may only suspend or cancel the licence. This is a far lesser offence compared to the attempt by Jallins Global Business to export without a licence which is a criminal offence that carries “a fine not exceeding two thousand penalty units or to a term of imprisonment not exceeding five years or to both.”

The appears the Energy Commission is more interested in going after a lesser offender while leaving the much greater suspected criminal off the hook.

The Commission, during a press briefing in the presence of the deputy minister for Lands and Natural Resources revealed the history of prosecutions since 2017.

The case before the Energy Commission is 21 containers of charcoal meant for export without a licence.

It is the case of the largest seizure of illegal charcoal, but the Energy Commission is not interested in the prosecution of the exporter. The main suspect is the exporter, Jallins Global Business Ltd, represented by Collins Antwi. He also represented himself as the forwarding agent when he dealt with the shipping line. But Dela now confirms he was working with Collins Antwi to export the illegal goods. Despite mounting evidence suggesting collusion, the Energy Commission has stopped police investigations.

From the happenings so far, the Energy Commission does not appear interested in going after them.

A mixed bag: Akufo-Addo’s words and deeds on climate change

Tears for LPG users, a dirge for our falling trees

Communications Ministry & NCA deny having information on SIM registration app.  So, who has it?