For six months, the state took away his freedom to travel. He was considered a flight risk.

But #FixTheCountry Convener, Oliver Mawuse Barker-Vormawor, can now travel because the Tema High Court has lifted the travel ban on him a few hours to his  intended trip outside Ghana.

“I am minded to say this after looking at the bill of indictment and the process thereof to conclude that the fact that one has been charged with a criminal offence does not take away the person’s constitutional right to freedom of movement,” the court said.

The court also ordered the release of the activist’s passport to him ahead of his scheduled travel to Senegal to deliver a paper at a meeting of Human Right Defenders.

The social media activist led a hashtag that took on the government for the country’s harsh economic conditions and constitutional arrangements that benefit the political class to the detriment of the ordinary Ghanaian.

However, his posts would trigger the state to an action that has curtailed his freedom.

On February 10, 2022,  Mr Barker-Vormawor wrote on Facebook that “If this E-Levy passes I will do the coup myself. Useless Army!” 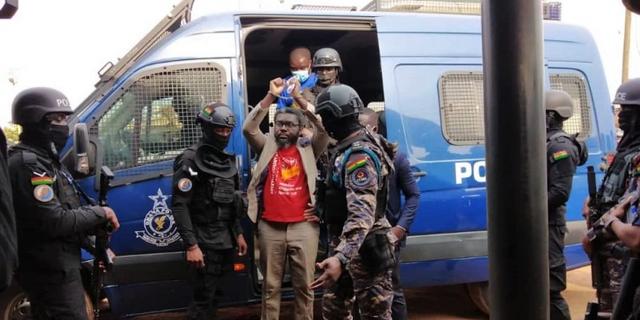 On his return to Ghana on February 11, 2022, he was arrested at the Kotoka International Airport, detained and later charged with treason felony, an offence he is fighting in court. His lawyers and some Ghanaians believe his comment does not warrant the charge.

But the state does not think so.

After more than a month in custody, he was released on March 17, 2022 with conditions that banned him from having his passport and travelling.

Since then, he had been at the Ashaiman District Court in the last six months and his case adjourned six consecutive times while the state prepares to serve him with a bill of indictment.

With his movement curtailed while his international peers in activism seek his experience, he went to the Tema High Court to challenge his right to travel.

Making his case before the court presided over by Justice Daniel Mensah, he argued in an affidavit that months after his arrest, the prosecution was yet to commence committal proceedings to assess whether he should be committed to stand trial at the High Court.

“The delays, which are entirely due to failings of the prosecution, breach my right to a speedy trial and have gravely affected my ability to effectively undertake my professional and academic engagements,” he said.

With the West African Civil Society Institute requiring his presence in Senegal, he said he needed the court to unmake the bail conditions that had kept him from international flights.

But the Attorney-General opposed the application, insisting that the prosecution had not delayed in the committal of Mr. Barker-Vormawor at the District Court.

The Attorney-General in his affidavit in opposition to the accused person’s request backed its claim with the fact that Mr Barker-Vormawor had appeared before District Court judge, Eleanor Kakra Barnes Botchway, on June 29, 2022 for committal proceedings to begin but the matter was adjourned to August 1, 2022 for continuation.

“The applicant has been charged with a serious offence and may not appear to stand trial if granted leave to travel out of the jurisdiction,” the Attorney-General further claimed

“He indeed has no real intention of attending the workshop, but rather to use the invitation as a ruse to obtain his passport to travel out of the jurisdiction to avoid standing on trial.”

“The applicant has not provided evidence of a return date or flight to the country and has therefore not demonstrated a willingness to return to the country to stand trial.”

The Attorney General alleged that by filing his application on July 12, 2022, six days after  being issued his  travel itinerary, the applicant intended to rush the court “into making a decision in his favour even though there is no demonstration that he would attend the workshop.”

The A-G also pointed out that in the era of COVID-19 that allowed virtual meetings Mr Vormawor need not be physically present at the event.

He therefore urged the court to dismiss the application.

But the judge disagreed.

“In this case, since the grant of bail to the accused person before me, he has religiously been attending court and thus complying with the court order,” he said.

Justice Mensah asserted that Mr Barker-Vormawor’s travel would be outside the country from Monday, June 18, 2022 July 22, 2022 would not jeopardize the case.

“Accordingly, I would order the District Police Commander of the Ashaiman District to release the passport of the applicant to him upon being shown a return ticket from and to Ghana within the aforesaid days.”

He, therefore, removed the “stop travel order” within the period of Mr Barker-Vormawor’s trip to the West African country.

He, however, directed the accused person to deposit his passport with the District Commander of Ashaiman Police District not later than 10am on July 25, 22.

YOU MAY ALSO WANT TO READ:

The Fourth Estate drags Council of State to RTI Commission

Sir John’s successor, three deputies have not declared their assets

The Fourth Estate drags Council of State to RTI Commission